Its size indicates its monastic origin; some sources refer to the existence of another monastery dedicated to El Salvador very close.

Currently, a Romanesque part is preserved in the apse and the nave but the whole facade was remodelled with a curious balcony in which there are two doors. It has a wooden roof gable, but curiously the nave does not exceed the height of the apse. The walls may have been reduced when the facade was remodelled. Original is the south gate with columns resting on bases, where its features confirm a former monastery because of a height greater than normal in origin due, undoubtedly, to the liturgical needs of a monastery. The capitals with finely carved vegetable decoration are without a doubt Romanesque, upon them an impost likewise decorated with vegetable motifs and geometric motifs on the left. The tympanum has an inscription and disproportionate measure. Its quoins are today mutilated by the subsequent reform with saw-tooth decoration.

Once the monastery disappeared and the function of the door was just an access of the faithful, its height was lowered and it was engraved the current Marian invocation of "AVE MARIA WITHOUT SIN CONCEIVED" headed by the initials JHS. On the tympanum, around the arch that outlines it we can see the inscription, "Tota Pulchra is mea, amica et macula non est in te" (all beautiful you are, my darling; there is no flaw in you).

The archivolt is rich decorated. The inner one has balls and the outer, fine ropes and leaves.

The semicircular apse certainly shows us elegant and spacious forms, divided into three sections by slender columns with carved capitals with vegetal decoration preceded by a straight stretch, and with three large windows with semicircular arch, which also shows vegetal decoration on the capitals of columns, upon which rests the archivolt. It is entirely covered by an impost of chess motifs on the outside and inside it houses again, balls or rosaceaes which surely refer to the worship to the Virgin.

In the interior the apse is covered with barrel vault on the straight stretch and shell vault on its curved dome. Some authors delay the chronology of this church until the beginning of the 13th century. No doubt is a Romanesque building from a mature period but away from conventions. Its forms are slender and elegant and the technical solutions adequate to the needs of the temple.

Inside, on the north side, it houses a curious canopied which represents a scene of the Annunciation. It is held with curious columns that remind us the sacristy of Oseira, with beautiful ogee arches. The Holy Spirit appears in the form of a dove. Between the Angel and Mary there is a vase with two handles in which three symmetrically placed flowers emerge.

On the other side are saints who take up the ends. The one on the left holds a book in his left hand and carries a sword raised high on the other, with beard and curly hair. The sword, instrument of his martyrdom and the book of the Epistles, refers to St. Paul.

The one on the right is Santiago wearing the Pilgrim Hat, with abundant and curly hair, as his beard. His right hand is on a staff and he holds a book in his left hand, from which a sort of Rosary hangs. The soft colours of this polychrome painting might have not been from the original paint, since we can observe different overlapping polychrome throughout the interior of the church.

Outside, the corbels are decorated with plant motifs or geometric shapes. And it keeps several sundials drawn on the blocks of stones on its south side.

The slender but, at the same time, rotundity of forms in Piñeira brings us closer to a mature Romanesque teacher. The decorative motifs which presents are also scattered in different temples of the region of Ribeira Sacra. There is a wide range of sources and influences on these works. 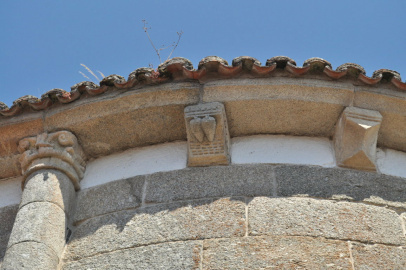 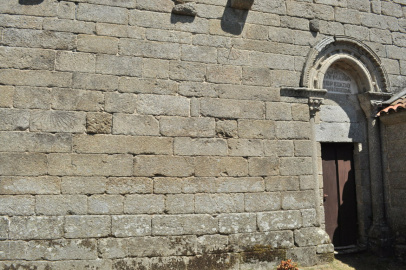 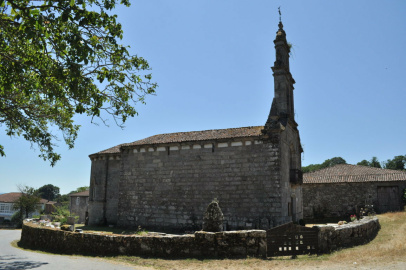 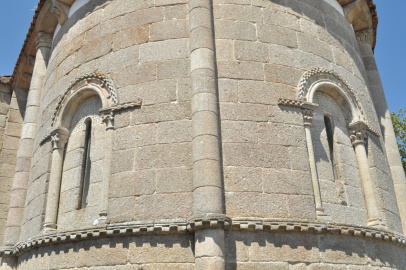 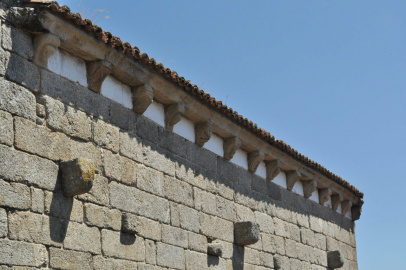 From Taboada, travel on the N-540 towards Chantada, then at kilometre point 45.5, you will see an junction on the right marked as A Refonteira. When you reach A Refonteira, turn right to travel towards Pacios, and then from Pacios continue to Piñeira, where you will see the church after passing through that village.