An engraving on the inside of the tympanum of the main door is dated 1170. The first documentary sources referring to this church go back to the 8th century and mention a Bishop Odoario. Ferdinand II and Alphonso IX also granted the monastery donations and privileges, which were confirmed by a number of popes, including Alexander III and Lucius III. Today, the church belongs to the bishopric of Lugo and is a parish church, after being restored as a bishopric on one occasion by King Ferdinand III in 1231. It was therefore completed at the beginning of the 13th century.

Architecturally, it follows the apse model, as the first part of the apse is straight but ends in a semicircle, with a triple rounded arch decorated with billets connecting it to the single nave. According to some authors, the billets are similar to the work on the porch of Platerías of the Cathedral of Santiago de Compostela.

In the nave it was intended to build a vaulted roof but this did not happen and the solution was a wooden roof supported on pointed arches, which rest on some curious capitals for the Romanesque architecture of the time. The insides of the windows have simple decorations. In the nave, the windows on the north side were closed off by the addition of the former bishop’s palace, which was used as a summer residence until the time of Bishop Aguirre in the 19th century. Inside, the rounded arches with an architrave were probably built to hold tombs, but this did not happen.

The decoration includes imposts with billets in various parts of the building which have been replicated both inside and outside. Special care was taken with the north and south side doors and of the main door, which have three openings, of which the side openings are blind.

On the main door there is a broad archivolt with four rounded arches with convex, half round moulding with groups of small balls, while the outside archivolt is decorated with billets. The columns on which the archivolts rest are of local marble. The capitals have symmetrical matching decoration with centaurs, quadrupeds, birds and hounds. The symmetry is broken on one side as one of the dogs has a human head. Again, the centaurs are a reminder of the Platerías. The moulding on the door also shows animals, possibly wolves or threatening dogs.

The side doors also have delicate decoration. The north door can only be appreciated from inside, and it has a fine decoration of billets that is repeated throughout the church. There are also two dogs’ heads on the moulding. The billet decoration is repeated on the inside of the south door. Outside, it has a tympanum with a double line of small blind arches and again one is surprised by the symmetry of the moulding, in this case, with two finely carved oxen.

The saint to whom the church is dedicated, San Paio, or Pelagio or Pelayo, was a 9th century martyr who was beheaded in Cordoba on the orders of Abdulrahman. Originally from Galicia, his remains are venerated in Cordoba. He is usually depicted as an adolescent, as he died young, and as holding a martyr’s palm frond.

The collective memory of the parish still recalls the summers spent there by the various bishops of Lugo, which is why a palace was built onto the Romanesque building. The collapse of part of the palace, which has recently been rebuilt, ruined the 15th century façade and brought to light some possibly Romanesque remains.

Around the church you will find important examples of traditional Galician architecture, such as a dovecot in the palace gardens, a washhouse and an oven, and, quite close by, a delightful collection of granaries. It should not be forgotten that the church is also very close to the Winter Way of Saint James, where it starts to descend the Codos de Belesar before crossing the river Miño into the village.

It was declared a national monument in 1931. 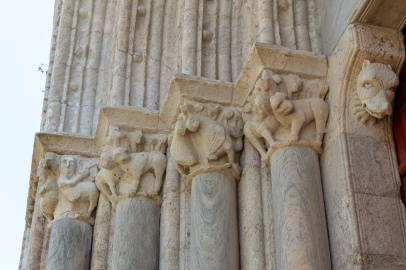 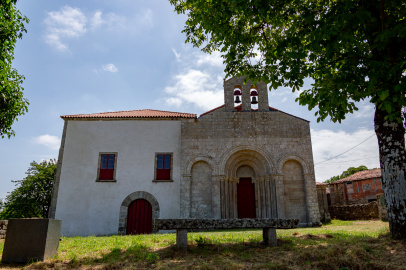 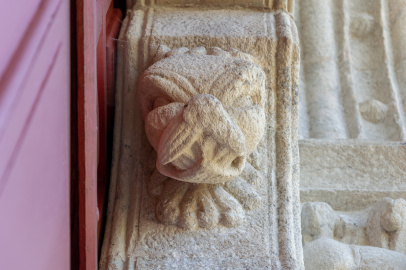 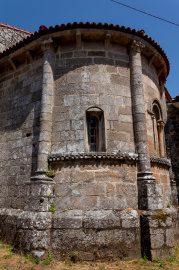 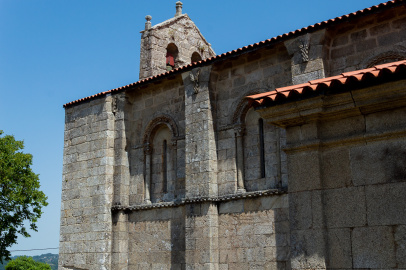 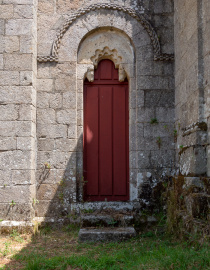 The church is less than 15 minutes from Escairón. Take the LU-617 in the direction of Chantada and after Carrasqueiras, turn left at the crossroads and follow the signs for the church for 4 km.