The church of San Pedro de Bembibre, possible monastery in its origins, stands out in our rural Romanesque for its harmonious and decorated main door with its serrated outer archivolt. The only document that we have from the 10th century is a mobile tomb kept in a nearby 15th-century-pazo fortress of the Lords of Taboada. The church remained linked to it for centuries after its donation in forum by the Abbot of Oseira to the House of the Taboada in the year 1238. Proof of this are the Baroque altarpiece where there is the coat of arms of the Taboada and the interior grave of Juan Taboada Ribadeneira y Figueroa, dated from 1681.

It is a single-nave church, with straight apse and semicircular front, covered with barrel vault and quarter sphere. An inscription on the south gate shows us the Era of 1229 date, year 1191. Its master is close to the works of the also master of Novelúa Monterroso and we may refer to the famous Master Martin.

As most of the churches of the area, it has an attached sacristy of the 17th century inside the slightly pointed triumphal arch, but the whole shows a sober harmony by the decorative emphasis of its doors. A curious pulpit in the north wall reminds us of the Franciscan refectories. It also keeps the original stone bank.

Capitals and corbels are dominated by the geometric shapes, with chained diamond-shaped motifs.

Outside, the front door has rich and varied decoration in its archivolts, with three pairs of columns, those in the middle with a curious zigzag trim on their shafts, and the capitals alternated with vegetable and elaborate decoration. A semicircular convex arch has three archivolts and the outer one has zigzag trim, as already mentioned, and saw-tooth. The attic bases are also decorated. The fussy capitals teach, illustrate, and educate us, since it is a Romanesque building.

Following the interpretation of the Romanesque scholar Mr. Jaime Delgado, native of Taboada, this is a little and humble tribute for his work. He refers to Psalm 91 “You will tread on the lion and the adder; the young lion and the serpent you will trample underfoot.”

The south door has double semicircular archivolt and decoration with vegetable motifs in the minor. The capitals have vegetable and elaborate decoration. Two gryphon are faced, one with raised heads and the other with a lion and a basilisk. Part of an epigraph shows the date of construction of the church, though it may have been missed the reference to the author. According to Vázquez Saco it would be 1191.

Fragments of paintings allow us to try to rebuild the collection that the faithful undoubtedly gazed at and read for centuries during worship. You can see a representation of Saint Christopher in the north wall. As coming from Canaan, trying to serve the most famous king in the world, he was at the service of Satan, realizing in time and fleeing from him to serve Christ. He helped travelers to cross a river. One day, a child he was crossing became heavier and heavier, but they finally reach the bank and Christopher needed a cane. In light of this, the child was revealed to be Christ. The abundance of details in the representation as fish and boats show us a late version of the story.

Other scenes reveal us Franciscan habits in some figures.

On the outside, we can see a modest but certainly magnificent cross stone. 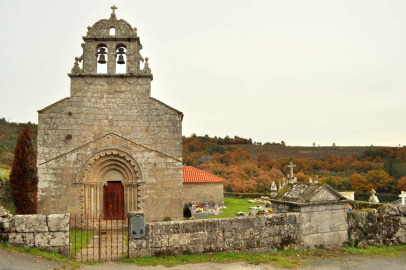 About 5 minutes from Taboada. Travel north on N-540a, and as you are reaching the end of Taboada, turn right onto LU-P-4905, then follow the signs to reach the church.