The Church of San Juan or San Nicolás presides over the square “Conde de Fenosa” in Portomarín. This village is right on Saint James´ Way and here came the order of the Knights of Saint John of Jerusalem in the 12th century to take charge of the hospital for pilgrims.

The Church is a work of the 13th century. Here moved one of the most direct contributors of master Mateo (some authors as Pita Andrade indicate the presence of the own Mateo in the building of the temple) that was responsible for building the church by the banks of the river Miño in a strategic position in the French way. It was relocated to its current location after being built the dam of Belesar. For this reason, you can still see the numbering of the blocks.

It has the structure of a fortress. It consists of a single nave and a semicircular front preceded by a straight stretch.

The main façade is crowned by a battlement, with arrow slits and towers on both sides. There is a great relieving arch divided into two parts by an awning. At the top, we can see a huge rose window detailed carved which is one of the largest in Galicia. At the bottom, it is the main portico with three flared semicircular archivolts decorated with motifs related to the workshop of Mateo. We highlight the interior one, where the twenty-four elders of the Apocalypse are playing their musical instruments. The tympanum, smooth and monolithic, is decorated with the figure of the Pantocrator. The archivolts are on three pairs of columns. The capitals are decorated in rich vegetable.

It keeps the North Gate and the South. On the Northern tympanum the Annunciation is depicted, and on the South, a figure with chasuble and mitre between two characters. The archivolts of both doors are richly decorated.

The interior of the Church is simple and elegant. The barrel-vaulted nave is completed with two edges at the stretch opposite the front. The front is covered with barrel-vaulted ceiling and shallow barrel vault. On the triumphal arch a rose window lights up the nave. On both sides, there are two baldachins.

On both sides of the front door, two spiral staircases give access to a corridor at the foot of the large rose window and, from it, to the battlemented round walk and four also battlemented towers.

San Juan de Portomarín is one of the best examples of the Romanesque in Galicia. 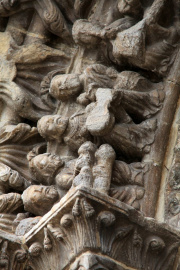 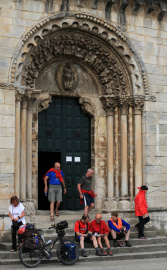 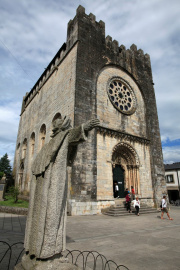 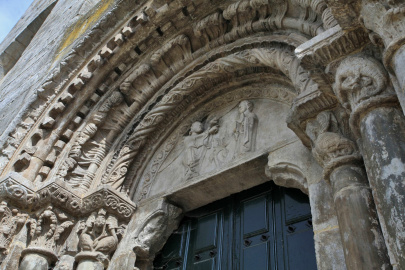 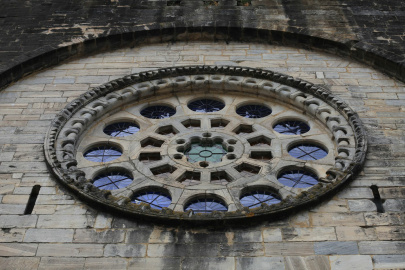 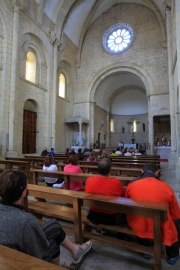