Between ancient forests, unwilling to disappear from history, the church of Santa María de Pesqueiras is another jewel of Romanesque architecture which is home to Ribeira Sacra.

By the banks of the river Miño, with the Belesar dam at its feet, proudly shows us its influences from Matthew, which surely this river transported. A former female monastery belonging to the Benedictine order, Santa Mª de Pesqueiras was one of many who saw their nuns leaving to lands of Compostela, in the year 1515. They were sentenced by an order and a reform the new Catholic monarchs carried out zealously in our lands.

The Church of Santa María de Pesqueiras has unique nave and apses, both with vaults and wooden roof. Due to its adaptation to the uneven ground of the Ribeira Sacra, it has the nave on two levels, saved by a large staircase. The altar is also highlighted because of its height.

Both in the decoration of its windows and corbels, and in the triumphal arch that highlights the sacred area of the altar, are clearly influences from Master Matthew. Most of it has phytomorphic decoration. The apses of the front, which do not show to the outside copied the same designs that the nearby church of Santo Estevo de Ribas de Miño. Windows flood the presbytery as well as the naves. A delicate South Gate with double archivolt and two pairs of columns introduces us to the temple under ropes, pearls, buttons and branches, which together which the cymatiums seem to be a work by Matthew. The main facade was improved and it keeps its bell tower. It is of the few Romanesque churches whose plant was not modified with the annexing to constructions or sacristies. The building of this church may be dated from the beginning of the 13th century, when forms and solutions invented by Matthew had already been developed and evolved by artists called “minor” who inhabited in our countryside and spread an old language but it is renewed.

It has been lost the image of Nuestra Señora de Pesqueiras, probably of the same period as the 13th century church, but it was not made of stone and it disappeared in a fire. We can still enjoy the paintings of the 16th century by some itinerant master. The mysterious image observing us in his medallion from a privileged place while leaning against the imposing image of Mary may be of the donor.

Actually, the paintings tell us a story everyone knows, but they also play among themselves and with us, with subtle and curious gestures, unnoticed at first glance. We have a meticulously fragmented Annunciation to get adapted to the space. On one side the Archangel Gabriel is represented, and on the other side, the Virgin Mary radiates serenity and purity in all its details. Presiding over the set it is the Pantocrator, eternal father who is holding the globe which is crowned with a cross, while with the other hand he blesses or warn us. He is wearing a triple tiara with a colourful red coat.

In the north wall of the Resurrection also adapts to the available space. It is clear that in Ribeira Sacra "space" is a treasure, and the fight for his conquest a chimera.

There is a triumphant Christ with soldiers outside his feet who doze, and continue with their games and attitudes. Burlesque seems also the coat of arms of one of them, and capricious and significant are their headdresses and hats, that lead us to the Court of Felipe II.

The magnificence of the Final Judgement imposing and terrifying is displayed by the south wall. But here we find the Mannerist whim, the forced, theatrical poses of the damned, in the iniquity of sinners... the wit and the power of evil are manifested in demons carrying muskets, which are handled with their left hand and threaten us. On the side of evil colours are vivid: red, earth... and everything is absorbed by a demonic mouth. The good side is dominated by Saint Peter, who waits and welcomes in his walls to the fair, orderly and obedient walking towards him. Christ on heavenly clouds, announced by trumpet angels presides over it, and flanked by his heavenly court where we all know who is who by their attributes, which remind us how important and durable our actions are. This is why there is San Miguel as model fighting the dragon, symbol of evil, which he manages to dominate. The message has been spread; you will be one of the lucky ones that read it. 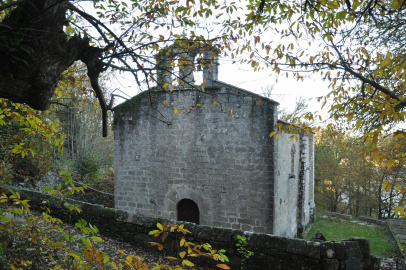 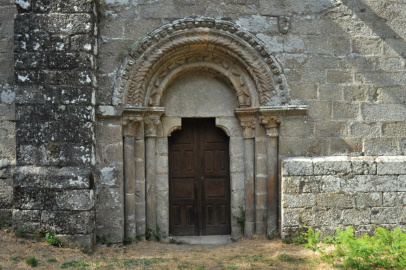 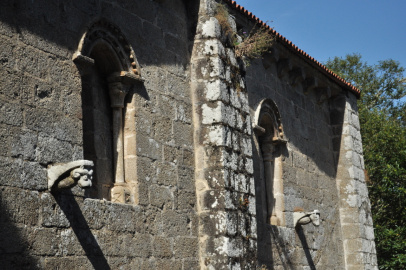 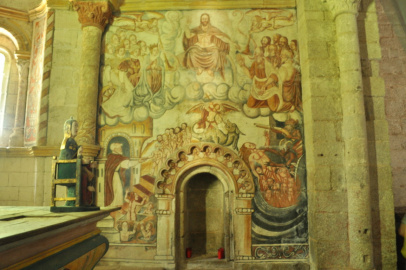 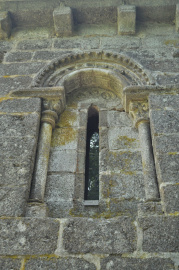