For some historians, this was the mythical Roman Proentia, as numerous Roman remains have been found on the site and reused in different places.

The church was founded as a parish church in the 12th century. Only the rectangular presbytery remains of the Romanesque structure. The rest of the church has been considerably altered.

Inside, the presbytery has a a triumphal arch with chequered moulding as its entrance. It has a barrel vault, with rounded arches resting on thick columns. Two of the four capitals are merely outlines. Of the other two, the capital on the left is decorated with plants and balls. For some authors, these are grains of cereal, a symbol of the Eucharist. The capital on the right is supported by a monolithic marble column that undoubtedly came from the Roman settlement. The capital appears to some authors to be decorated with plants. Others, however, interpret the decoration as the mitres and staffs of the bishops, the highest office in the church hierarchy after the Pope.

Some 16th century murals can still be seen in the vault of the presbytery. They were discovered by the parish priest in the 1970s and restored in 2002. They were simply cleaned and any holes, filled with water-based paint. The technique used was mezzo fresco, which differs from fresco in the thickness of the mortar. They have characteristics of Renaissance painting, such as an attempt to reproduce perspective, the treatment of the clothing and the introduction of architectural elements into the scenes. Looking from the front and starting on the left the following scenes can be seen: Adoration of the Magi (possibly the king who appears in the foreground nearly could be Philip II); the flight into Egypt, a scene taken from the Apocrypha that tells how the Virgin was hungry and the Child asked the palm trees to bend down to offer them their fruit (it should be noted that the fruit held by the child in his hand is more like a chestnut than a date); the Annunciation, on the front wall, the most important place in a presbytery; the Visitation; San Blas; and the Adoration of the Shepherds, in which the shepherds are shown as blonde-haired musicians, one of whom is cross eyed. Obviously, the artist was inspired by real people. 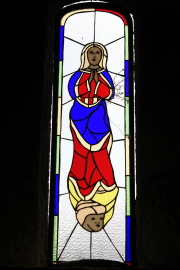 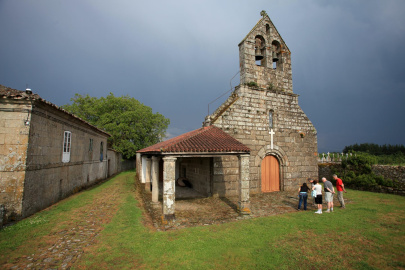 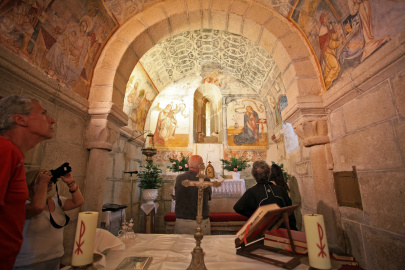 The church is just five minutes from Sober. Head south on the LU-P-5903 in the direction of Canón do Sil. One kilometre further on, next to a large water tank, turn left towards Proendos, and at the next crossroads turn right and go 200 metres to the church.