Santa María de Torbeo is a Romanesque church from the 13th century. The place names of the area and some documents that are kept revealed it could belong to the missing Benedictine monastery of San Pedro de Torbeo, where Pérez Vasco de Quiroga is buried.

In 1936, a fire destroyed the church and it was rebuilt in 1945. It keeps the primitive plant, although modified when the side sacristy was added in the 16th century, and the two side chapels in the 18th century, reduced in size. It has a single rectangular nave, of great sobriety, and a semicircular apse. The facade is crowned by a belfry.

In the interior, the arch to access the presbytery is pointed. It is decorated by an exterior trim or a trim with chess motifs. The lower arch rests on capitals with figurative decoration. On the right you can see two rampant lions face to face and in the centre, Christ within a mandorla. On the left, there are two lions with a bush in the middle.

Interesting is the baptismal font of the 12th century, made in granite. It has 120 cm in diameter and weighs about 800 kg. It is one of the few examples of immersion piles kept in Galicia. It is decorated with geometrical motifs and a salmon, since it has four fins. It may symbolize the resurrection, since salmon ascends rivers to leave offspring before they die. It has an inscription in Latin that means "without stain of original sin".

The exterior of the apse has complete windows with semicircular arch supported on columns, with trim with chess motifs.

To reach, we leave from the town hall of Ribas de Sil located in the main square. We have to take the N-120 road towards Monforte de Lemos. Arriving at Rairos, we turn left. We go on this road until we reach Torbeo. It will take us half an hour approximately. 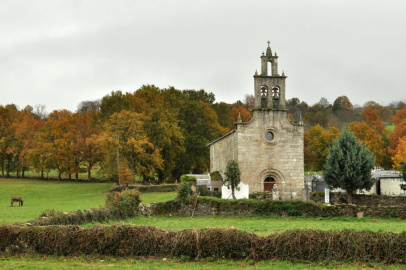 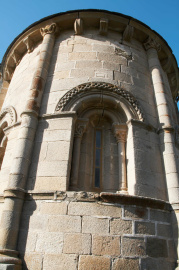 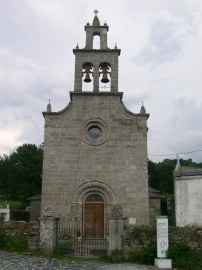 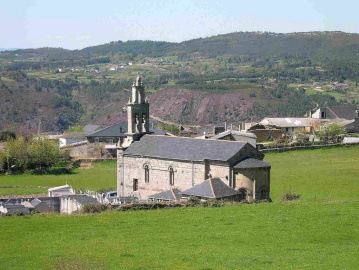 About 20 minutes from San Clodio. Take the N-120 towards Monforte de Lemos, and at kilometre point 495, exit to the right, in the direction of Rairos/Torbeo. After crossing over that highway, turn right towards Torbeo, which you will reach after travelling about 10 kilometres. You will see the church after passing through the village.