The monastery of Santa María is located in the village of Montederramo, dominating the square “O Mosteiro”.

Regarding its Benedictine origin of the primitive observance and with the name of San Juan, most of the historians who wrote about Montederramo attributed the beginning of its history to the founding document that was awarded in Allariz by Mrs Teresa of Portugal with date of August 21, 1124. In this document, Mrs Teresa gave the abbot called Arnaldo and the Benedictine monks who were with him a place called Rivoira Sacrata (or Roboira Sacrata) to found a monastery, indicating in the already said document the privilege by which monks could go elsewhere if they considered it to be more comfortable.

The primitive monastery was not located in the current Montederramo, but next to Leboreiro, in the village of Seoane Vello, under the name of San Juan, which belonged to the Benedictine order. The current monastery comes from the 12th century, being renovated and enlarged in the 16th and 17th centuries.

Juan de Tolosa, master Jesuit, was the responsible for the plans of the new church in late 1597 or early 1598. The work was conducted by Pedro de la Sierra. The end result is a beautiful basilica-style floor plan temple in Latin cross with three naves. In the austere, Herrera style of the new monastery church, it shines the functionalist and sparsely ornamented tradition of medieval Cistercian architecture. But it is especially perceptible how the style of El Escorial has greatly influenced in Galicia, as inspiring focus of the architectural renovation of the Spanish Renaissance.

One of the greatest pieces of Renaissance architecture in Galicia is the façade, very restrained, as the rest of the work. In the niche you can see the stone statue of the Virgin attributed to Alonso Martínez.

In the interior of the church, we highlight the main altarpiece, restored in recent times. It was the Galician sculptor Mateo del Prado who carved in wood scenes in high relief, dedicated to the New Testament, integrating them into the structural set made by the sculptors and engravers from Santiago de Compostela, Bernardo Cabrera and his son Juan.

Also the high choir was restored; a work of the Portuguese Alonso Martínez in the early 17th century made of white walnut without polychrome.

Attached to the south wall of the church is the processional cloister. It was built between the end of the 16th century and beginning of the 17th century. In the lower section we find a harmonious design made up by semicircular arches decorated with openwork Gothic tracery. The church is covered with stellar vaults of great strength of nine keystones on corbels. The upper section is more simple and functional. Today, the public school is in this cloister.

The monastery conserves another cloister, the guest quarters. It was built to provide accommodation to those who sought the hospitality of Montederramo. It has a square floor plan. His lower section is formed by four slender semicircular arches on each side with smooth shaft and Alcarria capital columns. In the spandrels of the arches of the lower floor, medallions with busts in high relief were carved. We highlight the Emperor Carlos V and his son Felipe II.

With the confiscation of Mendizábal of the 19th century, the monastery was acquired by an individual. Currently, dependencies where the monks lived are still in private hands.

There are other monasteries close to Montederramo, such as San Pedro de Rocas, which has a radically different style, and where a visit is highly recommended. 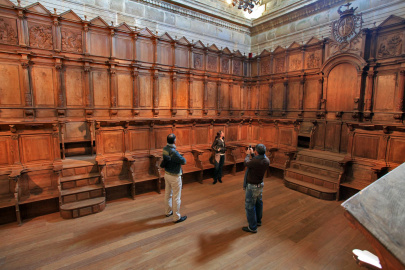 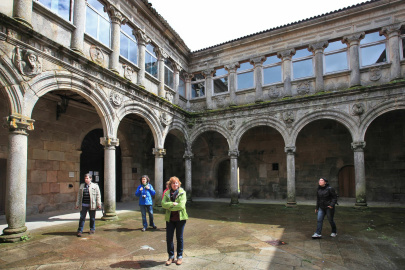 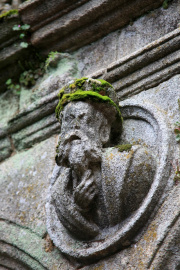 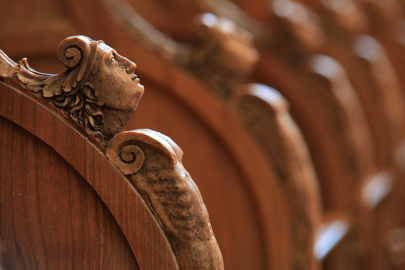 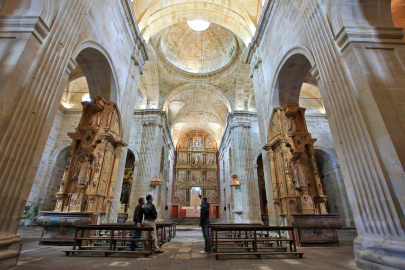 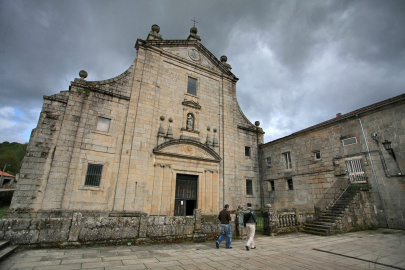 To get to Montederramo from the OU-536 highway, you need to turn onto OU-0602 in the village of Leboreiro, then continue for another 5 kilometres. The monastery is in the centre of the town.