One of the most interesting examples of the Romanesque of the Ribeira Sacra and of Galicia is, without a doubt, the Church of San Miguel, commonly known as "O Mosteiro".

It belonged to a former Benedictine monastery founded by Escladia Ordoñez in the 12th century, but it lost its independence in 1507, when the Catholic Monarchs ordered alterations in the Galician monasteries. Their incomes went to the Royal Hospital of Santiago and the nuns there were confined to the monastery of San Paio de Antealtares in Santiago de Compostela.

From the old monastery only the Romanesque church is kept, which is dated from the second half of the 12th century.

The church´s layout is very simple: a single nave with a semicircular apse. Between the nave and the apse there is another cross nave, on which is located a rectangular tower, covered the four sides, that makes the collection one of the most original examples of the Galician Romanesque.

The northern gate is one of the most interesting parts of the church. It is made up of a small semicircular arch. The moulding is decorated with chess motifs. It has twelve voussoirs, eleven of them are decorated with a few rosettes, unusual decoration in Galicia, and the keystone is an Agnus Dei. The tympanum is very simple and is geometric decorated with intertwined circles.

If something draws our attention in this gate is their quoins, decorated with an original tetramorph. On the right, there are two figures with human head and animal body. That to the inside has hooves and horns and on his head "LU" is written. At his side, the human head has animal body with claws, and "MA" is written on his head. It would represent the evangelists Luke (with his ox attribute) and Marcus (with its attribute the Lion). Opposite, there is a curious representation of John and Matthew. We can see a human head with wings (John and its attribute the Eagle) and a hand is placed on the chin of that head to represent Matthew (human). Inside, we find interesting pieces, such as a mullioned window with horseshoe arches, which tell us about a previous temple, or its baptismal font. It preserves remains of wall paintings from the 16th century, representing a Final Judgement.

In addition, it keeps a wide range of capitals and corbels with interesting iconography, which have given rise to many interpretations.

To reach the church of San Miguel from Ferreira de Pantón, we must take the road towards Escairón. In just five minutes we will turn right at a road that will take us directly to the Church. 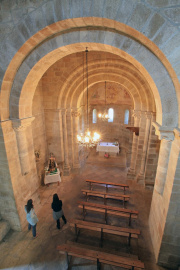 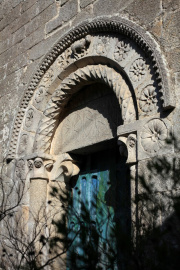 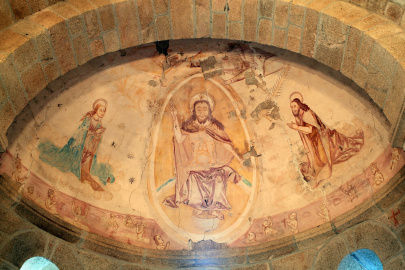 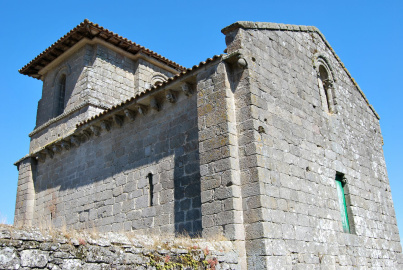 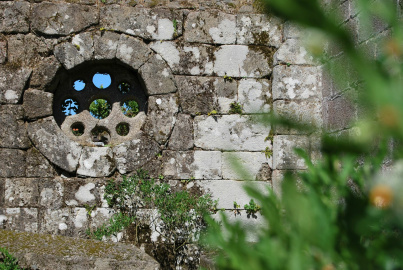