The monastery of San Pedro de Rocas is located in the hill Barbeirón, surrounded by rock formations that might have given a name to this place.

We know that in the year 573 six men inherited this place. The fact that six people inherit this, leads us to think about the beginning of a possible life in community. It is San Pedro de Rocas one of the first places in Galicia where there was a shift from life in solitary to life in group.

In the 9th century, life reappears in Rocas in times of Alfonso III “El Magno”, when we have to mention Gemodus as a restorer of the monastery.

From the 10th century, San Pedro de Rocas was a monastery which used to depend on Celanova, although during part of the 12th century it was linked with that of San Esteban.

At the end of the 15th century, the Benedictine reform was imposed in Galicia. This reform involved the grouping of monasteries and San Pedro de Rocas was incorporated as administrative priory to San Salvador de Celanova. The monastic life as autonomous monastery ended and it became a parish governed by monks until the confiscation.

The monastery suffered several major fires. One in the 10th century destroyed the archives. In 1928, another one was immediate and it was documented to reduce San Pedro de Rocas to a deplorable state. A decision to not restore the church was made, and a new one, simpler, was made at Quinta do Monte. There the bells were moved and a new cemetery was built.

The first thing that we see when we get there is what is known as Priory House. This is a building from the end of the 17th century which probably is at the place where the former monastery was located and devastated after a fire. Today it houses an interpretation centre of the Ribeira Sacra.

Beside the Priory House is the Church, which is certainly the most important part of the architectural collection. At the end of the 6th century there was nothing of what currently makes up the collection, with the exception of the caves. In three caves dug in the mountain, six males led a full or perhaps partly community life. We know that these were a Christian group. The Church was formed as we see it today, between the 12th and 13th centuries. The naves have a facade made up by arches added in two of the accesses to the naves. It has a central chapel and two on both sides. Looking to the front from the gateway, in the chapel on the left there is a grave under an arch, perhaps from Gemodus. On the wall that remains under the arch between 1175 and 1200, a mural painting unprecedented in Galicia was made, which is quite peculiar for being the only world mural map of Romanesque period referred to so far. The map described the apostolic diaspora, although moisture has damaged it. Another of the peculiarities of San Pedro de Rocas is that it retains a number of anthropomorphic graves on the floor of the church.

The current façade of the church was erected in the 19th century and was designed imitating the building style of the Priory House.

The bell tower has been and probably will be the symbol of this monastery. Although it is a fairly common in Galicia belfry, what makes it different from everything may have seen so far is its location, since it is on a natural high rock monolith.

Another space which must be seen is the fountain of San Benito, which is said to spring up miraculous waters. It is a natural supplier, where the water comes among the rocks. This fountain was dedicated by tradition of locals to San Benito. In the past, they used to say those who immerse a wart in water and prayed the Lord´s prayer were healed.

To get to the monastery of San Pedro de Rocas, we leave from the town hall of the village of Esgos, located in the square “Plaza da Souteira”. We take the road C-536 towards Ourense and just outside the village, we will turn right. We will continue on this road until we find another crossing also on the right. It is the road towards Luintra. Further on, we will see the road which goes up to the monastery. 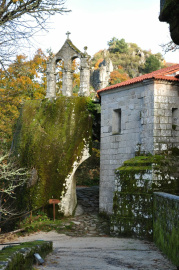 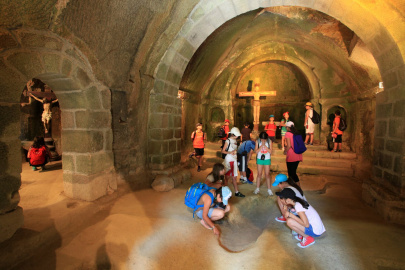 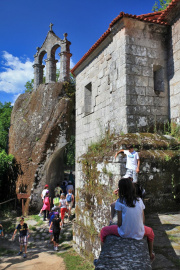 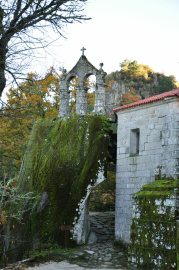 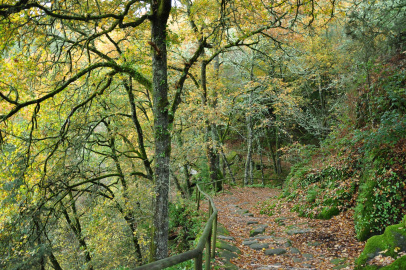