you are miracles erected by faith!-And look always to the infinity.

The church is on the west bank of the river Miño. Its history is linked with Bishop Odoario’s resettlement in the 8th century and a monastic enclave.

It was built at the beginning of the 8th century, although archaeological studies conducted at the end of the 20th century refer to several buildings that formed the basis of the current church. The remains of pre-Roman stones that have been preserved and are now in the bell tower are evidence that there was a previous building.

The church has a single, rectangular nave with a gable roof and a rectangular apse. It retains important decorative sculptures in the corbels and capitals, as well as many quarry marks.

The decorative elements on the north and west doors, common to other churches in the Ribeira Sacra, are linked to the tradition of Maestro Mateo.

Inside, some 15th and 16th century murals have been preserved.

The church was declared a national monument in 1975. 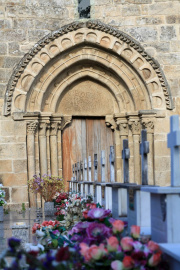 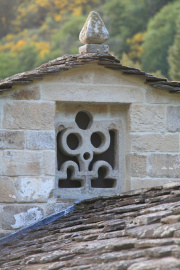 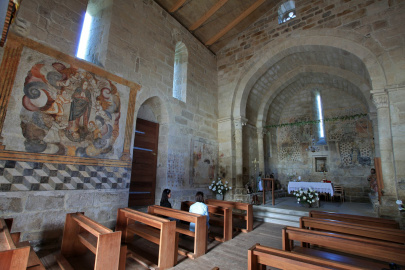 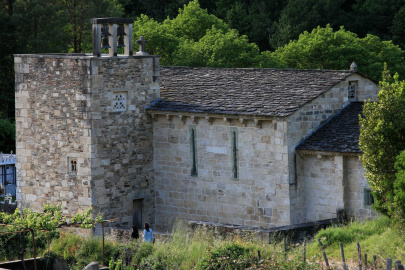 From the capital of Pantón, take the N-120 in the direction of Ourense. After 4.6 km turn off at Guitara. At the crossroads, turn left onto the N-120a towards Ourense. After a little more than 2.5 km, make a 180° turn to the right and follow the signs to the church. The total journey will take approximately 15 minutes.