The only female monastery that keeps religious life in Ribeira Sacra. Almonst known by Monastery of Bernardas

In the same town of Ferreira de Panton, we find the only monastery that still retains the monastic life of the whole Ribeira Sacra. Founded in the 10th century as a double monastery, remains so until the 12th century, when this type of monasteries were suppressed. In the year 1175 it annexed to the Cistercian and started a new stage of spiritual and economic renewal.

The monastery preserves a Romanesque church of the 12th century. It is one of the most interesting examples of Romanesque art of the Ribeira Sacra. It has a semicircular apse with interesting iconography. It was built before the annexation of the monastery to the Cistercian order. The nave is rectangular. It is covered with a coffered ceiling of Mudejar tradition of the 16th century. In the 18th century, it was annexed in the south wall a chapel dedicated to Saint Roque.

Inside, it is remarkable the reinforcement of the dome at the front with two nerves that also serve as a decorative element. There is a variety of elaborate capitals decorated with vegetal and animal motifs. On the left, we can first see a capital in which two anointed oxen are protected by two griffins, that is, animals that are taken from Eastern mythology with the body of a lion and Eagle's head. Some authors say the dual nature of Christ is represented, the human nature in the oxen and the divine one in the griffins. Then, there is a capital with an acanthus leaf where a lion cub is seen. On the right, we see first of all, a capital which represents Samson dominating two lions. Then, a character who has wings with two humiliated lions at his feet, which is interpreted by some authors as Daniel in the den of lions. On both sides of the straight section of the apse, two tombs of Gothic type can be seen.

Outside the apse, there is a varied collection of corbels with interesting iconography. We emphasize on the north side, those dedicated to minstrelsy with representation of the troubadour, the minstrel and the soldadeira. They are placed into a hierarchy and the minstrel lost his head, since these images used to be mutilated due to the indecent and immoral fact of acting for money. In the south wall, we must highlight the basilisk, a hybrid animal Saint Bernard used to say anyone can die just by looking at. The facade of the monastery is baroque of the 18th century, in a plain style as the guidelines of the Cistercian order. The cloister is Renaissance of the 16th century, with the first section made in stone and the second one in wood.

Nuns keep an image of a Madonna and the child in the monastery, Romanesque of the 12th century or beginning of the 13th.

You can not leave without tasting the delicious artisan pastry made by the nuns that live here. 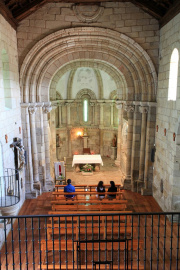 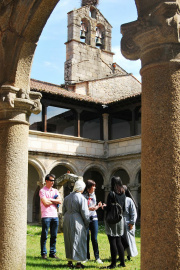 A Vila do Mato 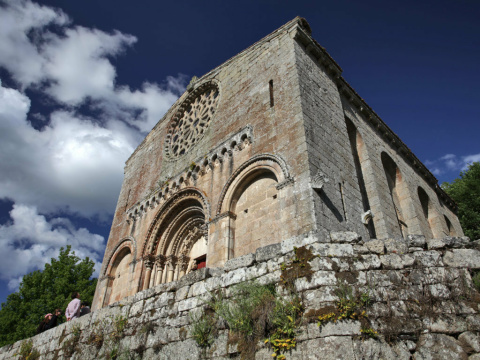