Along this small section of the French Route, pilgrims will explore the northern Ribeira Sacra, admiring the traditional landscape of this area of Galicia, with its rolling hills criss-crossed by small streams. This is a linear route which can be completed in a single day.

News of discovery of the tomb of St James the Great in what we now know as Santiago de Compostela, in the early ninth century, transcended the borders of the Hispanic kingdoms and spread throughout Europe. From that point on, the initial pilgrims who began to arrive would increase in number, until they could be counted in their thousands. All of this began to shape the Way of St James, transforming it into a backbone of sorts for Europe. Faced with this influx, the Hispanic monarchs of the time began to provide their support to this route, offering services and aid. This route would come to be known as the French Route. It starts in the town of Roncesvalles, and passes through cities such as Logroño, Burgos and León, connecting them all with Santiago. It enters Galicia through the municipality of Pedrafita do Cebreiro: a mountainous area in the province of Lugo on the natural boundary with Castile and León.

This French Route also crosses the Ribeira Sacra: more specifically through the municipalities of Paradela and Portomarín. It can be completed in one day, since it represents one stage of this Route if we start in neighbouring Sarria. During this stage, pilgrims will explore a totally rural Galicia.

Leaving the municipality of Sarria behind, we then move into Paradela, passing through a number of small villages surrounded at all times by meadowland and small patches of forest. Diverting slightly from our path, we can find Santa María de Loio church, which was originally Ribaloio monastery and the birthplace of the Military Order of the Knights of St James. After a steep descent, pilgrims leave the municipality of Paradela to enter Portomarín, crossing the river Miño slightly further on. Here we can see San Xoan church, moved stone by stone from its original site alongside the old town of Portomarín, now lying under the waters of the reservoir.

From here, our route begins to climb up a series of hills, passing close to Castromaior: a well-preserved, ancient pre-Roman settlement. Finally, pilgrims reach the small village of Hospital, which at one time housed a long-disappeared hospital for pilgrims. From here on, the French Route leaves the Ribeira Sacra on its way towards Compostela, taking in the towns of Palas de Reis and Melide. 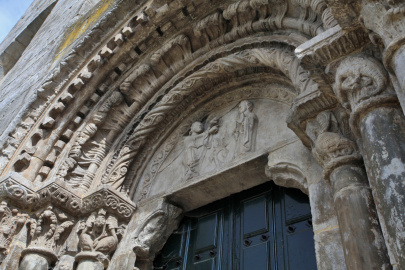