The most important group of mills in the municipality of Sober lies along the river Xabrega. In a little more than three kilometres, its waters turned 28 flour mills and two fulling mills. This exceptional ethnographic complex was partially restored by the municipal employment workshop, in the section between the village of A Boca and where Xabrega flows into the river Sil, in the hamlet of Os Chancís.

The mills can be visited by following a route that starts in Pouso do Branco, 500 metres from the village of A Boca. The path first goes down to the little river Xabrega. The first mill is the Roque de Arroxó mill. It has sturdy walls and is well preserved. After this, you must walk along the wall of the mill race to visit the next two mills, called the Nemesio da Boca mills. In both cases the walls, hopper and roof have been completely restored. The larger one had a room inside where the owner could rest.

Back on the path, it is necessary to cross the river over paving stones and again walk along the mill race to the Ramiro da Boca mill, which has also been completely restored. In this area, the mill races rose to a great height, resembling aqueducts.

After this there are two other mills, called the Chucán do Couto mills. At the first one, the walls have been reinforced and a platform has been built at the second mill so that visitors can watch the mill wheel turn, these days operated by a generator. This spot is known as A Calzada, meaning the roadway, as there was a Roman road here, the remains of which can still be seen.

The next mill is the Nabás mill, of which only the walls remain. Here, in a place known as A Alvariza, there is a fork in the path. The left branch goes around a rocky ridge, between high stone walls, and, 200 metres further on, rejoins the main path. Follow the right hand fork, which crosses the stream over a little stone bridge and continues on to the Conde de Camilo mill. The high walls and interior of this building are still in good condition and two millstones that operated simultaneously have been preserved inside. One of them was made of local granite and the other of a much finer white stone, with which the wheat was ground. This place is known as As Garduñeiras, the traps, a name associated with the steep wooded terrain. 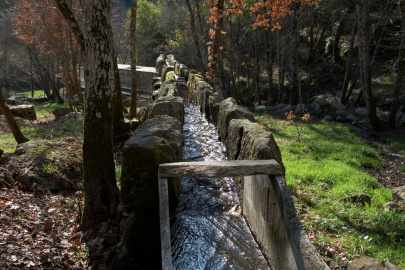 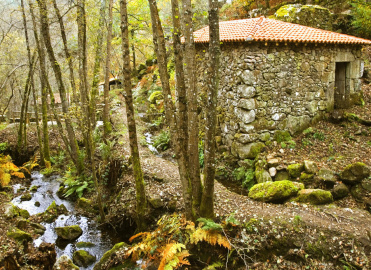 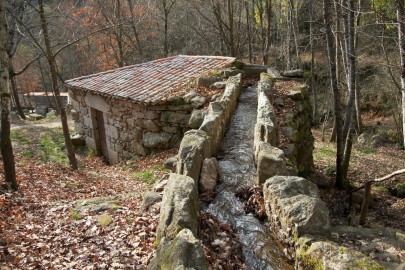 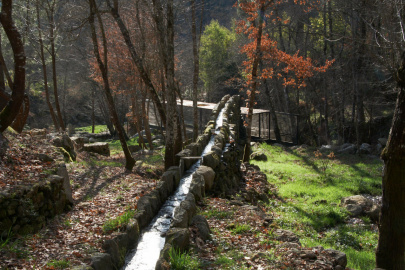 The mills are less than 10 minutes from Sober. Go along Rúa do Outeiro and follow the signs to the mills.