The Quiroga Geological Museum is one of the pillars of the Courel Mountains Geopark and forms part of its network of museums and interpretation centres, including the Devesa da Rogueira nature classroom, the Covas de Meiraos interpretation centre and the Ribas de Sil gold mining interpretation centre. It was also the first museum in Galicia dedicated entirely to interpreting its geological heritage. It was opened in December 2011 and extended in September 2020.

In a space measuring some 250 square metres, the Quiroga Museum contains the most representative geological features of the area, organized from the oldest to the most modern, in five rooms with the following contents:

Also on display in this room is a collection of the most representative rocks and minerals of the Geopark.

The palaeontological history of Galicia, the evolution of life.  The fossil record of the Courel Mountains Geopark. The Geopark is an exceptional place for studying the evolution of life in the north-west of the Iberian Peninsula during the Palaeozoic and Quaternary eras. Some of the most outstanding Palaeozoic fauna are invertebrates but the most spectacular are the remains of the little known fauna inhabiting Galicia in the Quaternary era, such as cave bears and brown bears, bison, mammoths, woolly rhinoceros and deer.

The panels in the room illustrate how the current landscape was superimposed over where the glacier fronts used to be, from the time of the greatest extension of the glaciers in this area to the end of deglaciation, when Lake Lucenza was formed.

The first human occupants of Galicia. The history of Elba, the shepherdess of the Courel mountains. This room offers a simple, general overview of the evolution of hominids, always a topic for revision and scientific debate, from our African ancestors to present-day Homo sapiens.

The Palaeolithic stone tools found in Gándara Cha, in the parish of A Ermida, only 2 km from the Geological Museum, put the Courel Mountains Geopark on the prehistoric map of Galicia, on one of the probable major lines of migration along the Sil river valley.

The fossilized remains of the woman known as Elba, the Courel shepherdess, who roamed these mountains some 9500 years ago, come from the north of the Courel mountains, in the municipality of Pedrafita do Cebreiro. The study of these remains, headed by the University of A Coruña Geological Institute, showed how Elba really was, by reconstructing her genetic code, which had been preserved in the DNA of her bones.

Ancient and recent mining in the Courel Mountains Geopark. The Courel mountains contain one of the most important mining districts in Galicia, which is why the last room in the museum is dedicated to the history of mining that has taken place from prehistoric times to the present day. The most important geological materials were five: slate, gold, iron, limestone and antimony, but only slate continues to drive the economies of Quiroga and Folgoso do Courel. 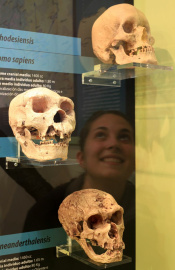 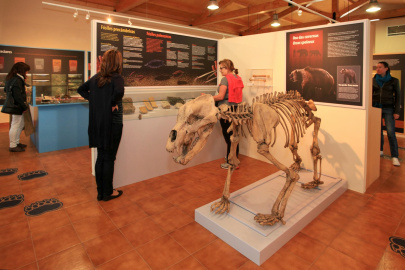 Outside the Quiroga town hall, go right on Rúa Real for 350 metres to the crossroads with the LU-351 and Rúa do Caurel. Go straight on for 300 metres. The museum is on the left.