On this route, you will discover some of the most iconic viewpoints in Ribeira Sacra. You will be travelling along the banks of the Miño River and Sil River, with stops that alternate between those close to the water and those at higher elevations.

You will begin the day at the viewpoint located at kilometre point 5 east of Chantada on the LU-533 highway, which leads Chantada to the city of Monforte de Lemos. This allows you to start off with a magnificent panoramic view over the course of the Miño River, with the iconic terraced vineyards from the Ribeira Sacra PDO on the surrounding slopes. If you look towards the left, you can also see the impressive location of the Church of Santo Estevo de Ribas de Miño at the peak of the mountain.

Next, you will travel to Belesar. You have two options for how to get there: by taking the winding road that heads down the slope immediately after the viewpoint, or by taking the next access road, which begins about 1 kilometre further down LU-533 in the direction of Monforte de Lemos.

Belesar is a very picturesque town. It is located right on the river and is surrounded by vineyards. Here you should be able to appreciate a very special characteristic of the waters of the Miño River: they are often so calm, they are almost like a mirror! Pilgrims travelling on the Winter Route of the Way of St James also pass through Belesar on their way to Santiago de Compostela.

After a brief stop in the town, continue on the highway that runs right along the Miño River (LU-P-5819) until reaching the riverside beach at A Cova (Praia da Cova). After that point the road will begin to ascend, and after about 3.5 kilometres, you will see the sign indicating the Cabo do Mundo Viewpoint, which offers views over the most iconic meander of the Miño River (you will have to leave your car by the road and walk for about 100 metres). Other alternative viewpoints, which offer very similar views of the same meander, are the viewpoint located at the Abadía da Cova winery and the one on the grounds of the Arxeriz Ecomuseum.

Your next stop will be Os Peares. To reach that location, follow the signs until reaching the LU-P-4102, then turn right and travel in the direction of Ferreira. After about 4 kilometres you will reach the N-120. Turn right onto that highway and travel in the direction of Ourense. Once you are on the N-120 you will begin to descend, travelling right along the banks of the Miño River, and after a few kilometres you will see the signs indicating Os Peares.

This is a very picturesque town, which is very notable as a point of intersection. Not only is it located at the spot where four municipalities and two provinces come together, it is also the point of confluence for three of the main rivers in Ribeira Sacra: the Sil, Miño, and Búbal.

From Os Peares, you will continue along the highway that runs right along the south shore of the Sil River (this road belongs to the electrical company, but private vehicles are allowed to use it). Now you are driving towards the boat dock at Santo Estevo and a viewpoint next to the river, in the Sil Canyon. Along this road you can also make a stop at the viewpoint over the Santo Estevo dam, where there are interpretive panels that provide information about the history of this dam and its construction.

After visiting the area of the boat dock, go back to the road you arrived on, and turn left to travel in the direction of Luíntra/Loureiro. Turn right onto OU-0508 when you reach the village of Loureiro, and continue until the village of Pombar. Then, just past that village, turn right when you see the sign indicating "Paradela". Park your car just after making that turn, then walk for approximately 300 metres to reach the Penedos do Castro Viewpoint. At this viewpoint you will have some spectacular views of the Monastery of Santo Estevo de Ribas de Sil, and of the point where the Cabe River flows into the Sil River.

Next, return to the highway (OU-0508) and turn left, going back through Pombar and continuing in the direction of Parada de Sil. Now you will be travelling along the upper part of the Sil Canyon. Stay on OU-0508 for about 13 kilometres, until you reach the Cabezoás Viewpoint. This is one of the highest in all of Ribeira Sacra, and it offers a panoramic view over the final meander of the Sil River, just before it reaches the Santo Estevo dam.

Next, continue along the same highway until arriving in Parada de Sil (this is a good place to arrive at lunchtime). Just north of the town you will find the most famous viewpoint in Ribeira Sacra, known as Balcones de Madrid [(may also be referred to on signs as Miradoiro dos Torgás) In addition to experiencing the remarkable vistas here, you can also see a historic foxo, which is a type of stone structure used to trap wolves.

After returning to the town, you will have two options for continuing towards the next viewpoint, which is the As Penas de Matacás Viewpoint:

While travelling to this viewpoint, you will notice how the landscape changes. This is because you will be entering into an entirely different part of the Sil Canyon. The steeper and rockier parts are left behind, as you arrive in a new area most notable for the presence of the terraced vineyards. This is a landscape you will be able to observe even better from the As Penas de Matacás Viewpoint.

Once you have visited that viewpoint, you will travel back to the highway (LU-903) and turn right to continue in the direction of Doade. Here again you will be travelling among the vineyards, towards the boat docks at Ponte do Sil and Abeleda. This is where you will cross the river, and then you will continue to ascend until reaching the Soutochao Viewpoint. At that viewpoint you will have a good, up-close look at the terraced vineyards and the steep slopes on which they have been constructed. Visiting this location will help you understand why the grape cultivation techniques used in the Ribeira Sacra PDO are referred to as “heroic viticulture”.

Finally, to complete the day the last stop on this route will be the Santiorxo Viewpoint. To get there, continue driving upwards on LU-903, and when you reach the village of Doade, turn left onto LU-P-5903 and head in the direction of Sober. There is a sign indicating the turn for the viewpoint 8.6 kilometres from that point. 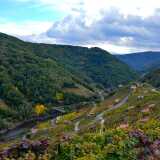 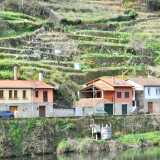 The village of Belesar, which belongs to the municipalities of Chantada and O Savinão, sits in a lovely setting among terraced vineyards and is reflected in the waters of the river Miño.

Located opposite the meander of the river Miño known as the “Cabo do Mundo”, the end of the world, it offers a spectacular panorama over the area near the banks of the river. From here you can see clearly how the vines are grown on terraces, one of the most beautiful sites in the area of Lugo. 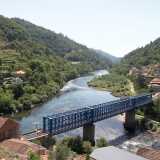 In addition, the town of Os Peares is characterized by being a place of union. The rivers Miño and Sil (also Búbal) meet here, as do four municipalities in two different provinces. 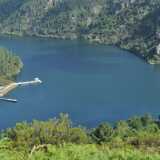 The jetty has two piers, from one of which there are river cruises along the Sil Canyon, operated by Viajes Hemisferios. There is also a café with a large terrace and a souvenir shop, and water sports can be practised here. It is also possible to walk along a small path along the banks of the reservoir. 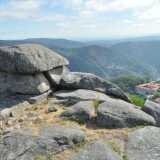 There was once a castro, a hill fort, here as this was a strategic place for defending the settlement and keeping watch over the lower land. Today, from this lookout point you can see the monastery of Santo Estevo, which is also in a privileged position, high above the Sil Canyon. 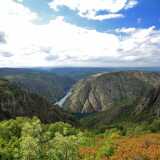 Cabezoás is one of the most popular viewpoints in the Ribeira Sacra, which indicates its importance in an area characterised by the number and quality of its viewing points. 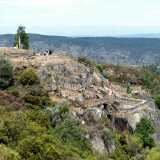 One of the most spectacular viewpoints in Galicia, and unquestionably the most breathtaking in the Ribeira Sacra. 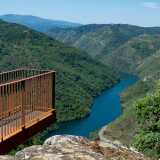 The lookout point is at an altitude of over 500 metres and is, as its name suggests, situated on the Peñas, or rocks, of Matacás. From here there are some impressive views of the Sil Gorge. 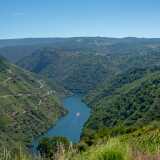 This viewpoint stands among vineyards that grow on steep slopes, hundreds of metres above the waters of the river Sil. At the entrance to the lookout point is a huge granite statue dedicated to the grape pickers of the area. 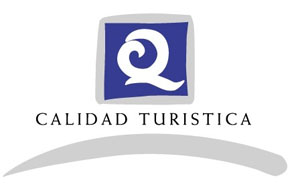 The group of viewpoints of the Sober City Council, including this one, obtained the seal of Tourist Quality of Spain (ICTE). Only five public spaces of this type, in the whole of Spain, have obtained this label until 2021. 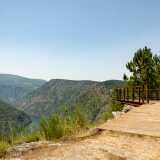 From this viewpoint, we can see Santa Cristina monastery on the other side of the valley, as well as the Sil Canyon as it passes through the municipality of Sober.